Every morning for the last four months, Ruslan and his wife, Yulia, have woken in simple metal cots in an Ivano-Frankivsk school gym that serves as one big bedroom for dozens of men and women, including people with disabilities, and their pets. Their few small bags of personal possessions are all that remain of their pre-war lives in this collective centre, one of thousands established in educational facilities across Ukraine.

They fled Mariupol, one of the hardest hit cities in Ukraine, in April, walking for days along minefields, having left their elderly parents who refused to be evacuated from their home city. Once a vibrant port city of over 400,000 people, Mariupol endured a vicious siege resulting in heavy destruction and is currently occupied by Russian forces.

Ruslan was an employee at the Azovstal steel plant – the last stronghold of Ukrainian troops in Mariupol and a shelter for many civilians who barricaded themselves in its basement, seeking refuge from air and artillery strikes. Neither Ruslan nor his wife know if their home is still standing and whether their family members are alive.

This scene is playing out across the country every day. An estimated 6,645,000 people remained internally displaced in Ukraine as of 23 July, according to the latest data from the International Organization for Migration (IOM). The difficulties they face while being displaced are often compounded by the grief of having to leave loved ones behind.

The couple, and more than 100 other internally displaced persons (IDPs), found shelter in this western Ukraine high school. In the early days of the Russian invasion, many communal facilities, such as schools, kindergartens, dormitories and religious buildings, were rapidly turned into centres for those fleeing the war. Not designed to serve as accommodations, they were meant to provide only temporary shelter to displaced Ukrainians. Six months later, however, people are still living there, often sharing one open space with little privacy.

“We were told that this is only temporary, and we would be relocated to another facility with separate rooms for each household,” Ruslan says. “However, repairs are still ongoing in that building and nobody can tell us when it would be possible to move. Most people staying here have nowhere to return to as their homes have been destroyed. We do not even know what happened to our house as we cannot reach our family members staying in Mariupol.”

While most residents here are accommodated in the gym, some families, including those with children, were placed in the classrooms. All are provided with three free meals per day; however, living conditions are far from normal. With only one shower facility and three washing machines, people must schedule a slot to use these services. 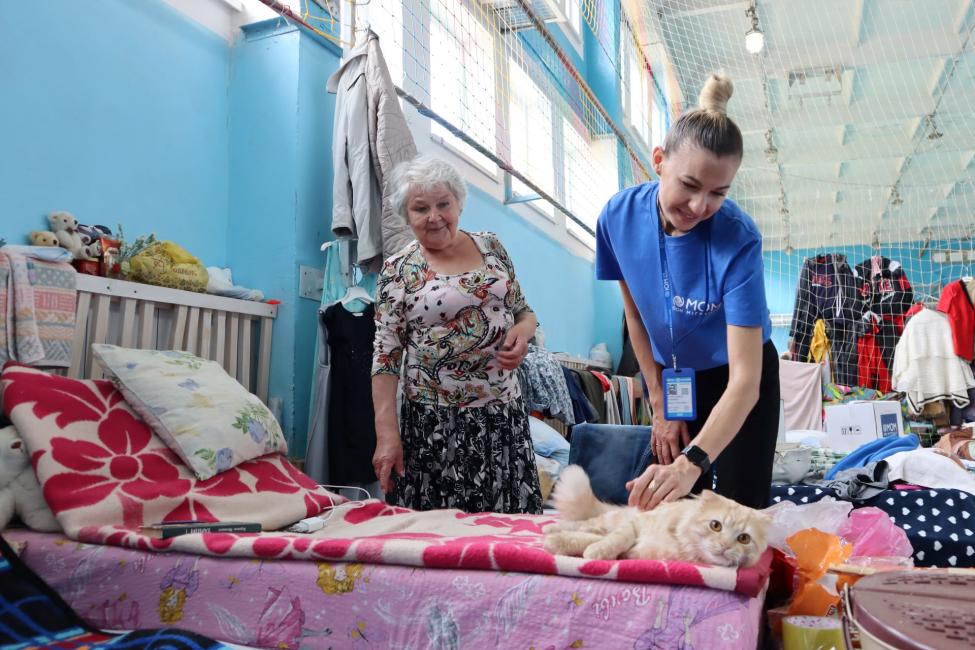 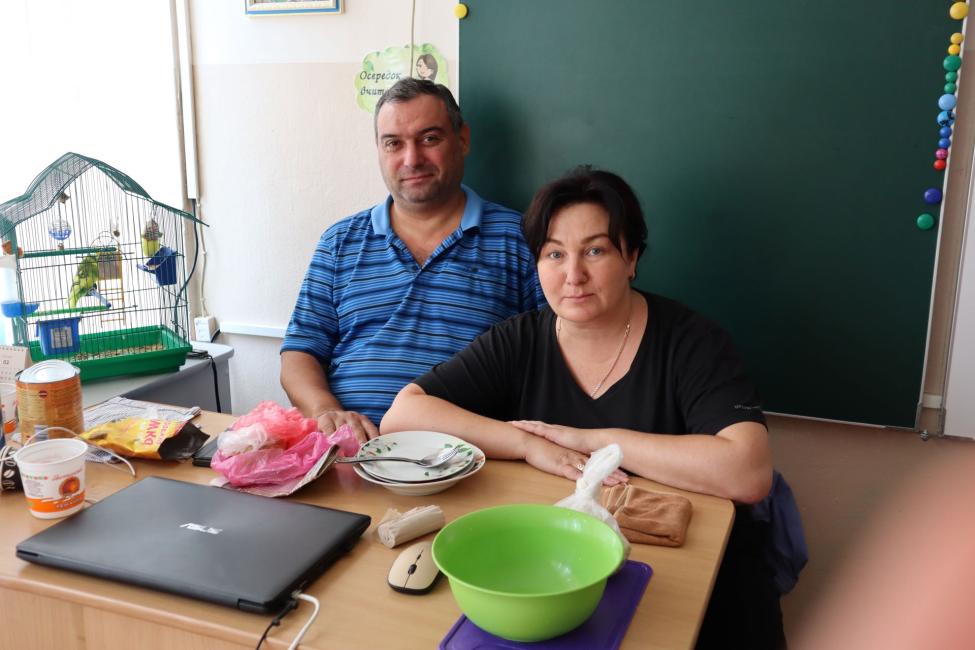 IOM is addressing the urgent needs of IDPs by providing the facility with basic household items, including things like extension cords so people can charge their phones – a necessity for many of the displaced, like Ruslan, who are desperate for news from their families. Every resident received a hygiene kit containing soap, shampoo, toothpaste, towels and other sanitary items. Partitions will also be installed to create individual sleeping areas and improve privacy.

“The needs of people staying in a school have changed over time. In the beginning, many lived here only for a few days or weeks before continuing their journey, often going abroad. Those who stayed have no place to go, and they need what each of us does — to take a shower, charge their phone, wash and dry clothes,” explains Dmytro Skydanchuk, the head of the educational facility.

With the start of the school year looming, educational facilities hosting displaced persons face another dilemma. Institutions with established bomb shelters and considered safe enough to reopen doors to children, must either relocate displaced persons to other centres or consider distance learning modalities that were in place during the COVID-19 pandemic. The school in Ivano-Frankivsk where over 1,300 students are enrolled will have to follow the latter. Even though it is equipped with a bomb shelter and underwent security checks, there is little chance that new accommodations will be ready in time before the school year begins.

“Our students and parents do not complain, they understand that there is war, and these people lost everything. Nobody will force them to leave, they are welcome to stay as long as needed,” Dmytro adds.

According to the Camp Coordination and Camp Management Cluster in Ukraine, as of the end of June, over 950,000 displaced Ukrainians were staying in 5,670 collective sites across 14 regions of Ukraine. Schools, kindergartens and dormitories account for 73 per cent of these facilities. People residing in communal settings are often the most vulnerable, as they lack funds to rent accommodation.

Authorities at the educational facilities themselves do not have a clear vision of how a learning process will be organized. Some institutions opted for a combined modality with offline learning for primary school students and online for teenagers. Others, mainly in rural areas, had been previously restructured and will likely continue functioning as shelters for displaced persons.

While the final decision of the authorities is pending, local communities and humanitarian actors work hand in hand to make living conditions for displaced persons more comfortable. In the village of Vartykivtsi, in Chernivtsi Region, located only six kilometres away from the border with Moldova, IOM supported a collective centre with mattresses, household appliances, water heating systems, and helped to repair two shower facilities in the building, improving the living conditions for over 80 temporary residents. Meanwhile, residents of the village provided food, medicine and clothes, and helped cook meals for those forced to flee the war.

Viktoria was displaced to Vartykivtsi from Berdiansk in Zaporizhzhia Region with her husband, three children, mother and brother – both of whom have disabilities. At the temporary shelter where they currently reside, the family demonstrates resilience and solidarity, helping to turn the school into a comfortable living space. Viktoria’s husband renovated the walls in the shower facilities while she volunteers as a cleaner and a cook.

“This is our common home, and we try to make it comfortable for us, our children and people who share our fate,” Viktoria says.

By Iryna Tymchyshyn and Maksym Petrov

A New Reality for Elderly Displaced in Ukraine: Fleeing War Instead of Enjoying Peace

Back in the Saddle. Back to Civilian Life

“Sunshine”: Orphanage for Children With Specific Needs Starts a New Life in Displacement