"The quarantine made us change almost everything in our business, first and foremost the general approach," says IOM grantee, Artur Kinosian, who is a veteran from Pavlohrad, Dnipro Region. Together with his wife Olena, he used to produce packaging for corporate gifts, but due to COVID-19, the demand fell sharply. "We had to start taking on any orders that we could fulfil. Stencils, educational games, alphabets, rulers, decorative panels, promotional products, slate boards, and this is not even the full list of our products," explains the veteran.

Fortunately, orders continued to arrive, as Artur had already earned a reputation as a good craftsman and an honest businessman. Olena recently completed studying the basics of business. She wanted to make chocolates, but so far decided to do her best to support her husband and promote their craft business. 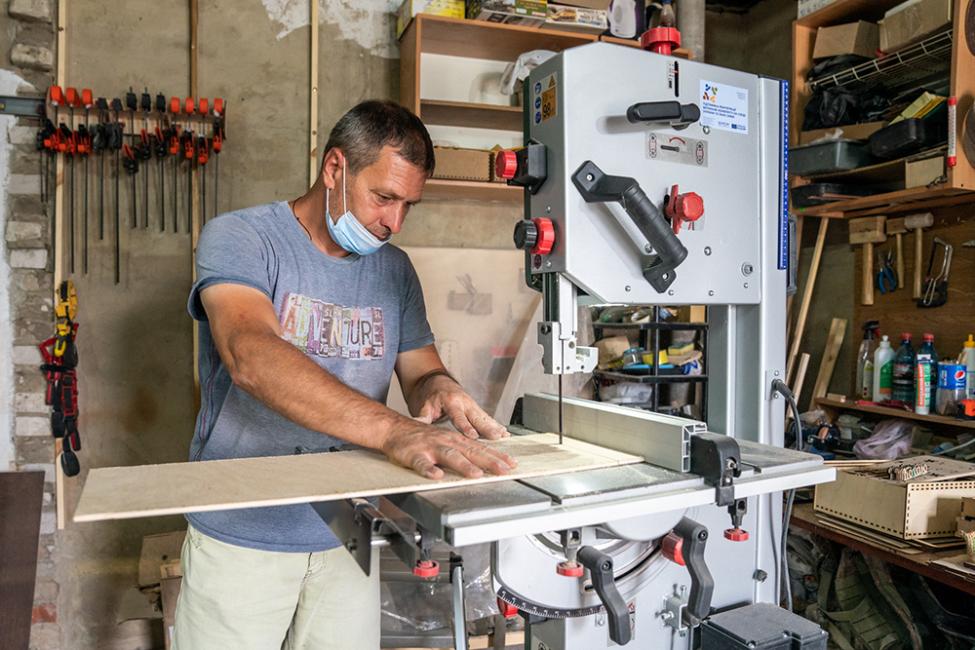 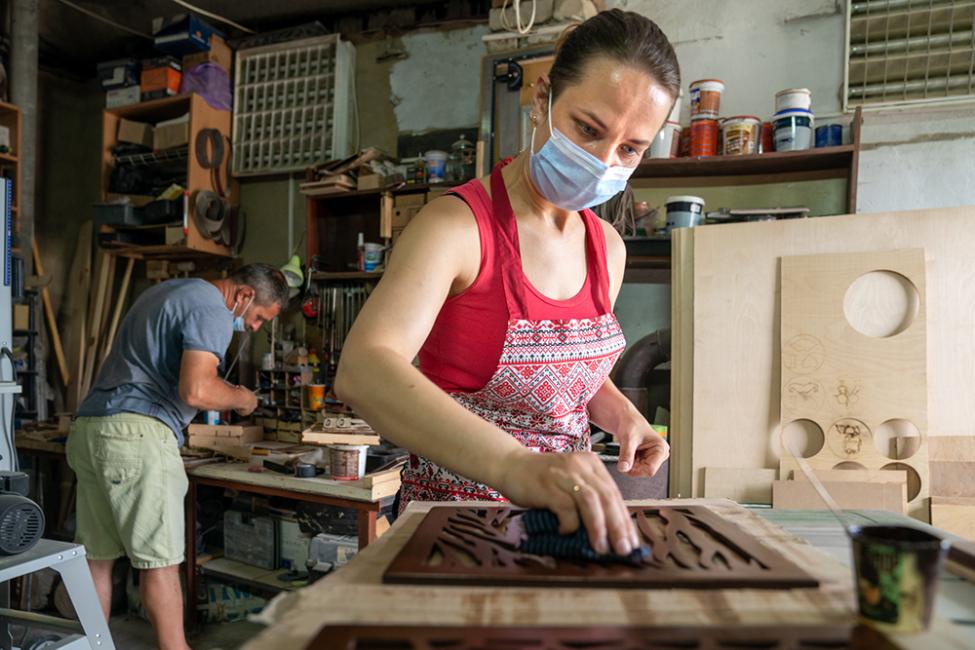 In Artur’s and Olena’s small workshop, several protective shields remain from a large order, which Artur and another veteran Taras Bereza produced during the quarantine this spring for hospitals in Dnipro and other cities.

Artur is a military engineer by education. He has been working as head of a department at a factory for many years. Making souvenirs started as a hobby and has grown into a business. "Almost everyone dreams of their hobby being their job," says Artur.

From 2014 to 2015 he served in the Eastern Conflict Area. Upon demobilization, he returned to the factory but realized that the surrounding life changed and so did he. The veteran started devoting more and more time to his own business.

"Probably everyone who gains a military experience reconsiders what they value in life, as it becomes clear that life is short and fragile,” Artur shares his uneasy experience. “You can wake up in the morning, have breakfast, go to work, come home in the evening, have your bottle of beer, go to bed and continue the next morning the same way. You can rejoice over the weekend… But in five or ten years, you realize that life just passes you by. Maybe someone is happy to live like that, as on an assembly line, but I need to constantly create something, to move somewhere. My business is for my soul and for my self-esteem. When you make something and people buy it, that's good. And when they say that you do it very well, you feel that there will be something left in this life after you."

As an example of an emotional give-back from their work, Artur and Olena recall how last year when their youngest daughter started the first grade they crafted personalized rulers with each of her classmates’ names for them. Then other parents from the school started ordering the rulers for their children as gifts.

Last year, Artur took part in an EU-funded IOM project on veterans’ reintegration and received a compressor, a band saw and a thickness-jointing machine as a grant for his production. During business training sessions within the project, he met other veterans, with whom they are now building joint plans for moving to a larger production facility and creating new jobs. 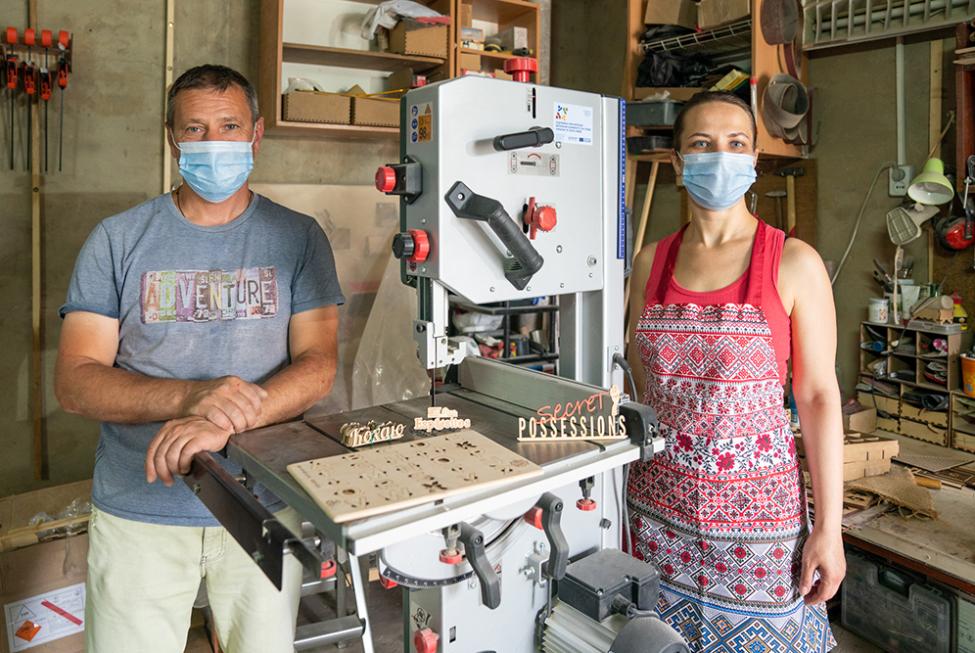 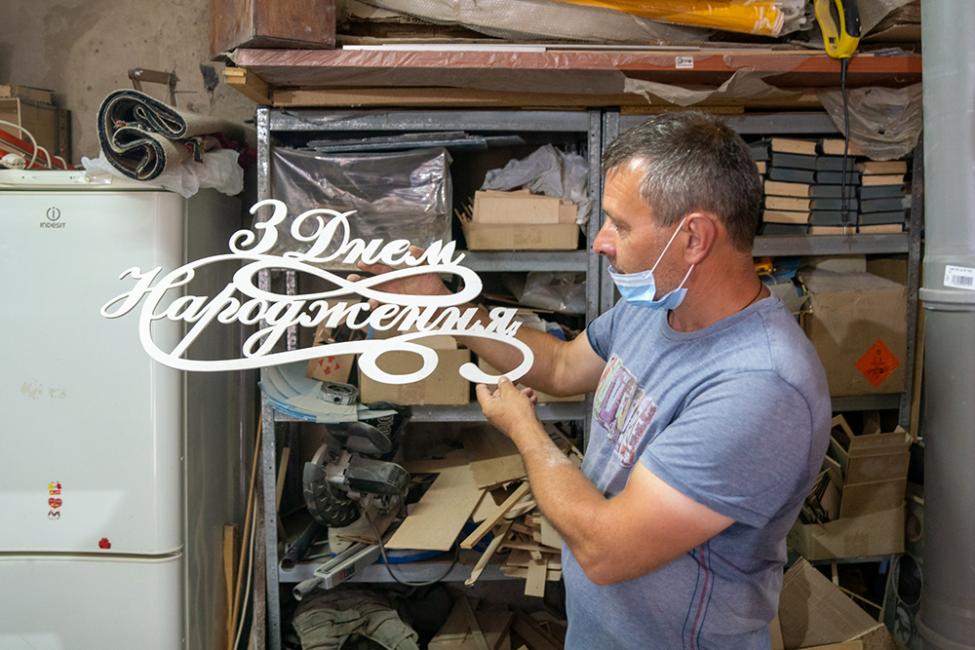 "This project is still giving me a morale boost. We keep talking, the guys help me, I help them. We are on the same page, we understand each other and trust each other. When you have that kind of communication, you move forward faster and further,” says Artur.

Soon, Artur and Olena will be moving forward faster with a new laptop that IOM purchased for them. As public events under the EU-funded veteran reintegration project were cancelled due to the quarantine, IOM used the allocated funds to provide additional grants to 120 veterans who have successfully developed their businesses but faced serious challenges due to the COVID-19 pandemic.

"We have a computer in our workshop, it stores all the drawings and ensures the work of all machines, so it is simply impossible to use it for accounting and advertising. Children need our home laptop for studying, especially now when it is all online. That's why we applied to IOM for a laptop to be able to promote all the interesting and beautiful things we can produce,” explains Olena.

One of the main motivations for the couple to keep moving forward is their children. "We want to show them that everyone is the creator of their own destiny. They look at us and study hard. I think they follow our example,” Olena smiles.