On World Day for Cultural Diversity for Dialogue and Development, 21 May, we remember Taufik Kezma, who a century ago enhanced the potential of culture to bring the then Ukrainian society and the Arab world together.

A graduate from the Kyiv theological seminary, a philologist who spoke six languages, an outstanding translator, a professor of the Arabic language, and a close friend of, a founder of the Ukrainian Academy of Sciences Ahatanhel Krymsky. The name of Taufik Kezma, a migrant from Syria, who settled in Kyiv at the beginning of the tumultuous 20th century, is hardly known to a wider audience, both in Syria and Ukraine. However, his legacy is carefully preserved by the Syrian community in Ukraine which now accounts for over 10,000 people.

The head of the Syrian Diaspora in Kyiv, Imad Iddin Zaza, attempted to bring the unknown facts about Taufik Kezma’s life into light in his documentary titled “Christian from Damascus”. The film tracks back key milestones in Kezma’s journey to Ukraine: from the arrival to recognition of his linguistic talents and publishing one of the first Arabic grammar textbooks in Ukraine. As for many others, regardless of their origin, Kezma’s life in Ukraine was overshadowed by the political and social turmoil in the then Russian Empire and the Soviet Union. The Revolution, two world wars, Nazi occupation of Kyiv and the Stalin era’s repressions did not spare Taufik Kezma as well. Living behind the Iron Curtain meant that he could not return to Syria while his ties with theological activists led to the arrest and accusations of “espionage for a foreign country.”

We met with the director of the film, Imad Iddin Zaza, to discuss what inspires him about Taufik Kezma’s life and why cultural diplomacy and dialogue remain the most effective tools for peaceful coexistence.

Your documentary about Taufik Kezma is a cinematic investigation that lifts a curtain and gives us a glimpse into the life of the Syrian, and more broadly, Arabic diaspora in Ukraine at the beginning of the 20th century. Why did you decide to tell this story?

First of all, I deliberately decided to cover the issue of Christianity because Syria is considered a cradle of Christian civilization which originated in the so-called Levant – a territory that now covers Syria, Palestine and Lebanon. Taufik Kezma was raised as a Christian and was sent to study theology in Kyiv in 1896. He completed his studies and decided to stay in Ukraine because he loved this country. He was a preacher at the Saint Andrew Church and in parallel, he also started to teach Arabic. To engage with his first students, Taufik Kezma placed a note at the entrance of the Kyiv Taras Shevchenko University: “If you are interested in learning Arabic, please sign into my class.” Yuriy Kochubei, the first Ambassador of Ukraine in France, who was Kezma’s student, told me this story. It was also him who helped me finding Kezma’s grave in the Kyiv Baikove cemetery where he was buried alongside his wife in 1958. Taufik Kezma lived silently and died silently. A very little was known about him and for this reason, I wanted to provide the Ukrainian and Syrian audiences with an opportunity to learn more about this great man who was a pioneer in so many senses – as a linguist, a professor and a translator.

Your film covers one of the darkest periods of the last century – the repressions of the Stalin regime against the religious leadership. Taufik Kezma was also arrested in 1939 and spent several months in prison being accused of “espionage.” This signifies that the oppressive machine did not spare who to target – be it Ukrainians, Russians or representatives of other ethnicities. Did Kezma consider returning home and how he lived through all those challenges?

Before the 1917 Revolution, he visited his family every summer travelling from Odesa by ship. However, afterwards, it became almost impossible due to restrictions imposed on travels and correspondence from abroad. Taufik Kezma lost his parents very early and was raised by one of his brothers Iskander with whom he maintained links. Another brother died during the Arab-Israeli war. Therefore, back home Taufik Kezma only had the extended family, while in Ukraine he developed a network of friends and like-minded professionals. He was respected in the scientistic world and decided to stay and live his life in Ukraine. As for his arrest, it was a part of a bigger crackdown against the clergy in the Soviet Union where atheism was pronounced as a “new religion”. We found his personal case in the archives of the Security Service of Ukraine. Most notably, there was a protocol of his interrogation where Kezma refuted the accusations about “anti-Soviet espionage activities” and defended his Christian beliefs.

His close ally and friend Ahantanhel Krymsky also suffered from these repressions, spending several years in prison where he died in 1942. Kezma founded out about this only after Stalin’s death when the victims of terror were rehabilitated.

In the Ukrainian version of Wikipedia, Kezma is mentioned as a Ukrainian scientist of Syrian origin. Long-term emigration often results in blending the identities when the identity of origin and the acquired identity of a country where one lives come together. In your opinion, how these two components influenced Kezma’s mentality and views?

Kezma loved Ukraine and felt that his contributions were useful. When a person accepts customs, traditions, language (and he knew both Russian and Ukrainian very well, as well as Arabic, Persian, Turk, Hebrew), it is natural to become a part of society. He felt well integrated, so he accepted citizenship and decided to stay here and even got married denouncing his religious status.

This film is also about the cultural diversity in Ukraine which existed for a very long time. People are not aware of this or sometimes they are not ready to admit it. In fact, people like Taufik Kezma lived in Ukraine, studied here, contributed to this society and the country, and suffered the same way, as Ukrainians did. Many people might be surprised to learn from your film that Syrian immigration to Ukraine has such a long history.

Absolutely. In the archives, Taufik Kezma found many manuscripts in Arabic and translated them. One of them dates back to the 17th century and describes a journey to Ukraine of the Patriarch Macarios from Aleppo, including many details about customs and life in Ukraine at that time.

Through his work as a translator and a language teacher, Kezma became a “cultural ambassador” of the Arabic world in Ukraine. Do you think, such diplomacy is in demand now?

I am certain that notwithstanding political and diplomatic relations between countries, cultural ties must be preserved. Through culture, we can understand others, how they live, what they aspire to. In recent years, as the head of the Syrian community in Kyiv, I organized many events, such as photo exhibitions, film screenings, traditional festivals. This is what brings people together despite all differences. 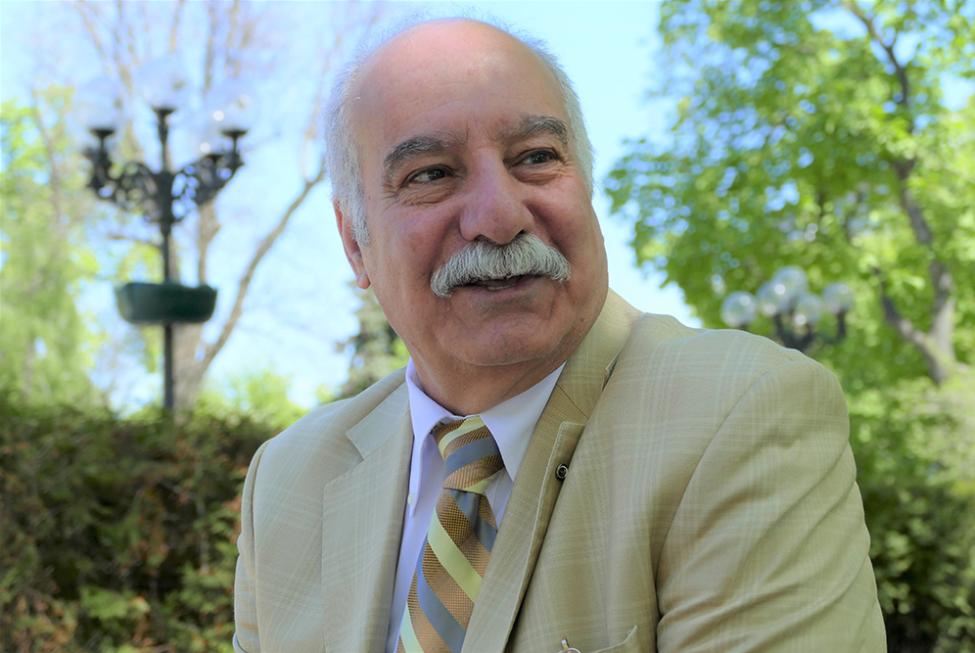 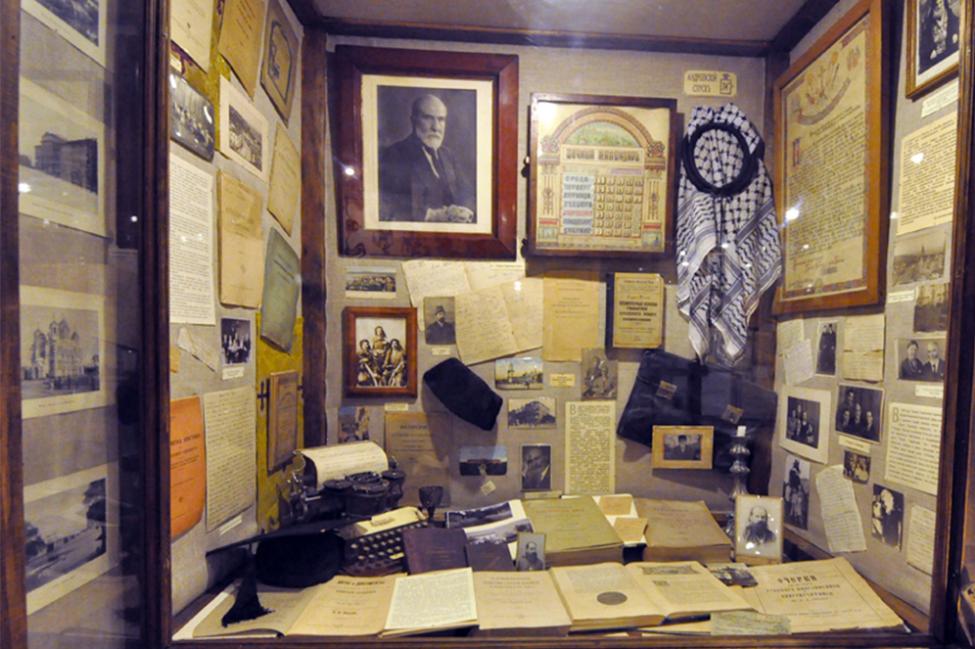 Like Taufik Kezma, Imad Zaza arrived in Ukraine from Damascus as a student. In 1977, he stepped on Ukrainian soil from the ship arriving in Odesa. Eighteen years later, he received an academic degree in cinematography and released several films as a scriptwriter, director and actor. He performed on different stages in Ukraine, and once played in a pantomime alongside prominent Ukrainian actor Bohdan Stupka.

As the head of the Syrian community in Kyiv, Imad Zaza works to strengthen ties between Syrians and Ukrainians. According to him, many places in Kyiv still hold memories of Taufik Kezma and everyone can take a tour to learn more. The best place to start would be “One Street Museum” in Andriyivsky Descent. Kezma lived in this building for several years and now his personal belongings, photos and a copy of the Arabic grammar textbook are part of the permanent exhibition.