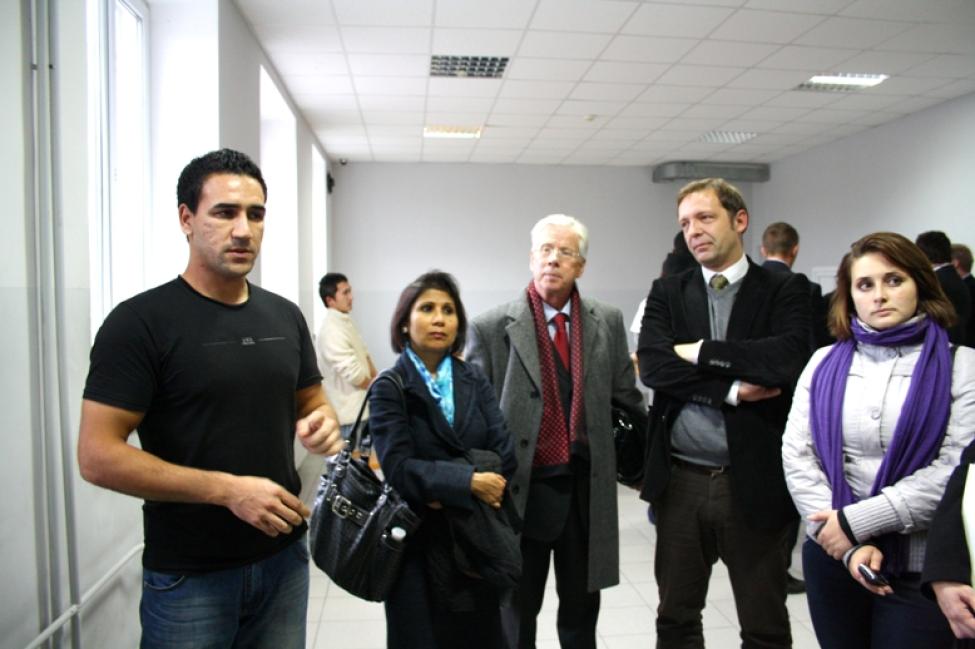 On the occasion of the United Nations (UN) Day the Heads of Agencies of UN Country Team visited Migrants Accommodation Centre (MAC) in Chernihiv oblast to see firsthand the conditions in which apprehended irregular migrants are living in.

After touring the Centre UN Resident Coordinator Olivier Adam stated his satisfaction with the conditions at the Centre and congratulated MAC?s administration for their efforts to implement best European standards.

?Improvement of migration management and specifically implementation of best practices on migrant accommodation constitute an important part of Ukraine's strategic efforts in relation to the ongoing visa-free dialogue with the European Union?, added IOM Ukraine?s Chief of Mission Manfred Profazi.

Having noted good accommodation standards, United Nations Country Team members were yet taken aback by the stories of some migrants. A young man from Afghanistan has claimed that he paid USD 10,000 to the people who brought him to Ukraine and promised he would get a citizenship and job here. ?The false promises smugglers make to migrants in despair and the lack of factual information irregular migrants have about conditions they will face in countries of destination need to be better addressed in order to combat the root-causes of irregular migration?, said Manfred Profazi.

The Chernihiv Migrants? Accommodation Centre was refurbished and equipped by IOM with EU funding. It opened officially in summer 2008 and now is administered by the State Migration Service (before June 2011, by the Ministry of Internal Affairs). Irregular migrants are transferred to the MAC by a court decision and stay there for up to one year, awaiting decision on their future. Since 2008, over 1,000 foreigners passed through the Chernihiv MAC, most of them men. According to the 2009 European Commission monitoring mission, Chernihiv MAC was recognized as one of the five best facilities of this kind in Europe.

Irregular migrants staying in the MAC can apply for participation in IOM?s Assisted Voluntary Return Programme, which facilitates orderly, safe and dignified voluntary return options for irregular, stranded migrants and failed asylum seekers. IOM does not participate in any form of forced returns of migrants.

IOM Ukraine also coordinates the Observatory Mechanism, designed to conduct joint assessments of migrants? accommodation conditions at the Chernihiv and Volyn MACs, as well as in the Temporary Holding Facility in Chop, with the purpose to safeguard migrants? rights protection. Daily presence of the partner NGOs at these facilities allows the Observatory Mechanism to collect a unique statistical information. This would be impossible without fruitful cooperation and consolidated activities with the governmental agencies. On the basis of individual NGO reports, IOM compiles and distributes monthly reports among interested state authorities, diplomatic missions and civil society. Monitoring missions to the observed facilities are organized on a regular basis, resulting in the development of action plans for further improvement.