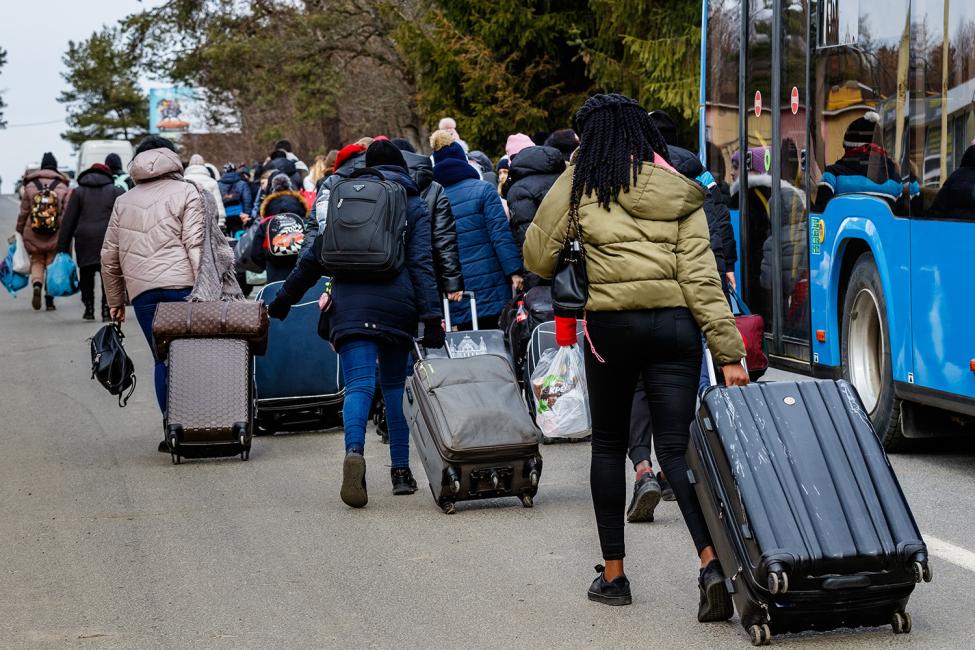 Women and children fleeing from the Russian military invasion in Ukraine and heading to other countries face risks of human trafficking, while men staying in the country can also become a prey for exploiters, warns IOM, the UN Migration Agency.

In 2021, the IOM Mission in Ukraine identified and assisted over 1,000 victims of trafficking: men, women and children. These numbers are only the tip of the iceberg, as many trafficking survivors do not get identified nor receive assistance. An IOM-commissioned survey estimated that 46,000 Ukrainians suffered from human trafficking during 2019-2021. Eighteen per cent of the respondents surveyed by IOM last year said they were ready to accept an informal and risky job offer abroad, almost a third would do so in Ukraine.

“We know how quickly the criminal world adjusts to changing realities and finds new victims. We call on Ukrainians and other nationals leaving Ukraine to stay alert and be cautious when on the move, at a new place or at home,” said IOM Ukraine Chief of Mission Anh Nguyen.

While cases of human trafficking are usually difficult to identify in the immediate aftermath of mass displacement, initial reports from within and outside of Ukraine indicate that traffickers are ready to exploit the vulnerabilities of those fleeing Ukraine. IOM also flags cases of family separation, unaccompanied and separated children that are on the rise, as well as potential cases of conflict-related sexual violence among protection concerns that are linked to human trafficking. Loss of jobs and income as a result of the war, and limited possibilities to meet basic needs in the case of both IDPs and refugees but also widely the conflict-affected population, will add to the risks.

To address the issue, IOM Ukraine has scaled up the work of the National Migrant Advice and Counter-Trafficking Hotline 527, by extending opening hours, doubling the number of advisers and offering reliable and updated information on a wide range of topics. The hotline, which can be accessed from within Ukraine, has already provided over 12,000 consultations to over 2,400 callers received from 24 February to 16 March only, which is 60 per cent more compared to the same period last year. More than half of the people calling are newly displaced persons. The hotline provides verified information on rights and obligations related to the current procedures of border crossing, services within Ukraine and neighbouring countries, work of border-crossing points, safe travel and countering human trafficking.

IOM has also boosted its prevention work on the ground by developing targeted information leaflets and posters with safe travel rules in times of war, including for women and girls. Additionally to a wide online outreach, IOM has started distributing over 100,000 leaflets, including in partnerships with partner NGOs that provide protection services to IDPs and conflict-affected populations in ten regions in western, southern and central Ukraine, at transport hubs and reception centres, as well as at the border crossing points. Furthermore, targeted trafficking prevention information promoting 527 Migrant Advice and Counter-Trafficking Hotline was disseminated through official social media channels of the Ministry of Social Policy and Cabinet of Ministers of Ukraine, as well as through local authorities.

The IOM-supported National Migrant Advice and Counter-Trafficking Hotline can be reached in Ukraine at 527 (free from mobile phones) or at 0 800 505 501 (free from landline phones) from 8 a.m. to 8 p.m. Those staying abroad can reach hotline consultants at 527.hotline@gmail.com.

For additional information, please contact Varvara Zhluktenko, IOM Mission in Ukraine, via vzhluktenko@iom.int or at +38 067 447 97 92