No Single Portrait of a Trafficking Survivor: With Digital Mask Iom Takes Users on Risky Journey 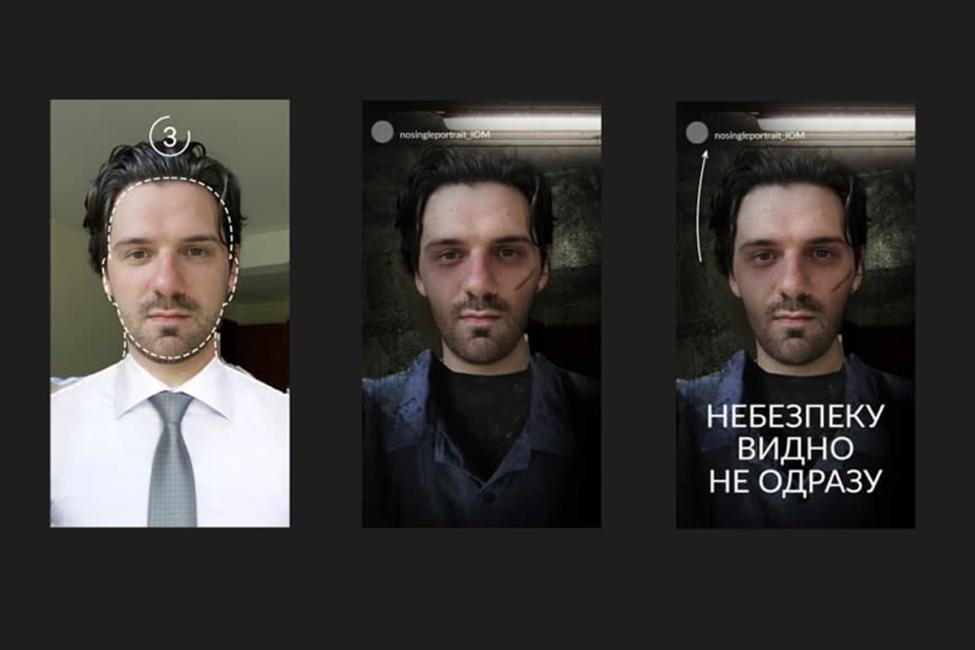 Take a free instant photo for work documents and see how the reality might quickly turn into the trafficking situation. IOM, the UN Migration Agency, offers this interactive experience to Instagram users with its new digital campaign “No single portrait”. It was launched on 30 July to observe World Day Against Trafficking in Persons and will run on social media for three weeks.

A dedicated Instagram page hosts a digital mask, equipped with tools and filters for taking a photo for work visa or CV. When a user takes a selfie and taps on the screen, a face becomes withered, and the background turns grey, as if suddenly a person was transported to a dark basement with blinking half-broken lights.

A caption of the photo sends an alarming message “Danger might be invisible at first” and a special arrow takes a user to the account created for the campaign @nosingleportrait_IOM. This page contains visual materials and the address of the counter-trafficking web page stoptrafficking.org, providing information about human trafficking, safety rules and numbers of the relevant hotlines, including the Counter-Trafficking and Migrant Advice Hotline 527, functioning with the support from IOM.

Photos of opinion leaders and all users, who tried the mask on, will be published on the platform under hashtag @nosingleportrait_IOM.

Due to the COVID-19 pandemic, more and more people find themselves in a difficult economic situation, and are forced to look for opportunities to earn a living, which leads to additional risks. The vast majority (93%) of victims, identified by IOM in the first six months of 2021, have suffered from labour exploitation. About three fourths (74%) of them are men. Over eighty per cent (80%) of victims have technical or higher education. For the first time since IOM Ukraine provides reintegration support to trafficking survivors, Poland became the main country of destination for victims of human trafficking from Ukraine (38%), followed by the Russian Federation (36%) and Ukraine (18%).

In total, together with a network of partner NGOs, IOM provided reintegration assistance to approximately 19,000 persons. This included legal consultations and representation in criminal and civil court, medical care, psychological counselling, shelter, vocational training, a grant programme supporting those trafficking survivors who aspire to set up their own business and other forms of assistance.