The Japanese Government Is Allocating USD 4.5 Million to Support the Conflict-Affected Population in Eastern Ukraine 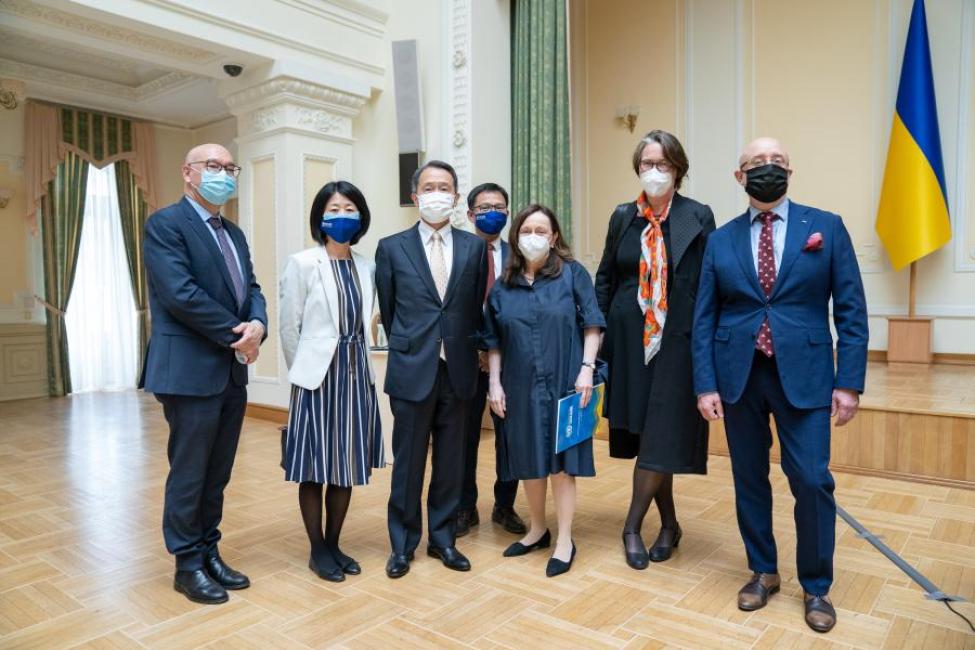 At the press conference held today in the Cabinet of Ministers, Vice Prime Minister of Ukraine Oleksiy Reznikov, in particular, stressed:These include providing medical humanitarian assistance to Ukraine, helping communities in Donetsk and Luhansk oblasts to reduce the impact of COVID-19, delivering humanitarian assistance, and protecting internally displaced persons and people living near the contact line in government-controlled areas of Ukraine, as well as providing immediate help and rehabilitation during emergencies in Ukraine.

"First, on behalf of the Ministry of Reintegration, the Government and the people of Ukraine, I would like to thank the Government of Japan and our international partners - the ICRC and the UN - for their unwavering and consistent support to Ukraine at all levels, in particular for humanitarian aid provided to Donetsk and Luhansk oblasts, some parts of which are still under occupation, where people suffer from the effects of Russia's armed aggression, and where national and international humanitarian law is being violated on a daily basis. What the Government of Japan and our international partners are doing today is for the people, for the sake of people and about the people, and we will work in partnership with you to ensure a normal human life for all those who are in the war zone today.”

He reminded that last year the Government of Japan allocated $ 4.23 million to support Donetsk and Luhansk regions under various UN and ICRC programs. "Japan, together with the UN and the ICRC, is already implementing a number of important projects: more than 400 houses affected by the fighting have been restored in Donetsk and Luhansk oblasts. Projects in the field of youth, education and community development were implemented, emergency care was provided within the health care system of servicemen in Ukraine, etc. This year we can refer to the implementation of projects worth $ 4.5 million. "Once again, I sincerely thank you and look forward to meeting with the Ambassador and Prime Minister of Japan Yoshihide Suga at the celebration of Ukraine's Independence Day and the inaugural summit of the Crimean Platform in Kyiv," Oleksiy Reznikov added.

In his turn, the Ambassador Extraordinary and Plenipotentiary of Japan to Ukraine Takashi Kurai shared information about the activities to which the funds will be directed to:

“I am very pleased to announce new assistance projects in the year of Ukraine's 30th anniversary of independence. Japan and Ukraine share the common democratic value and interests: welcoming our shared value, Japan stands firm on the position of supporting the sovereignty, independence, and territorial integrity of Ukraine. We also support and respect Ukraine's strategic direction to pursue the European integration and Euro Atlantic Alliance.

Japan, the Ukrainian government, and international community have been working side-by-side to help implement reforms towards further democratization and economic development of this country for the last three decades. Since its independence, Japan's assistance to Ukraine has reached 3.1 billion USD, including 1.88 billion USD since the Revolution of Dignity in 2014. We believe our assistance will contribute to Ukraine’s structural reforms and realizing its goals.”- stated the Ambassador of Japan to Ukraine.

«Such support is vitally needed at a time when COVID-19 is exacerbating the already difficult situation of families and communities living on both sides of the contact line in eastern Ukraine, where the conflict is entering its 7th year. Three projects of UN Agencies - IOM, UNOPS and UNHCR - being funded thanks to Japan’s generosity and adopt the right set of approaches to address the needs in the east of the country in a holistic, multi-dimensional approach.

The projects will focus on a myriad of areas to mitigate against the impact that range from humanitarian interventions, such as providing emergency shelter kits and supporting voluntary relocation of conflict-affected persons away from the ‘contact line’, strengthening health care facilities, but also enabling development and social inclusion through programming, such as generating employment through income generation schemes and implementing community support initiatives.

Despite the current humanitarian challenges and COVID-19 pandemic, the UN continues to provide strong support for the conflict-affected population of Ukraine.

The head of the ICRC in Ukraine, Florence Gillette, mentioned that the ICRC's funds provided by Japan, which amounted to 1 million USD this year, has significantly supported the work of the organization in Ukraine on both sides of the contact line:

“Within the last three years have been repaired more than 13’500 houses on either side of the line of contact. In 2021, ICRC plans to help more than 3’700 households to live in more dignified conditions after their dwelling was damaged by hostilities.

Since the beginning of the pandemic, the ICRC distributed more than 300 oxygen concentrators to treat COVID19 patients, including 107 in 2021 to-date. It contributed hundreds of thousands of PPE to health and emergency staff on either side of the line of contact so that they could attend to the needs of the population. More than 60 primary health care centres do receive support from the ICRC, in addition to more than 30 hospitals. Support to repair, maintain and upgrade medical infrastructure continues; in 2021, it will support structures with more than 3’000 beds.

It also supported the places of detention and the penitentiary systems in either side of the line of contact to reinforce their prevention and response plan to the pandemic through technical advice and in-kind donations. Last week only, 9000 hygiene parcels were distributed to places of detention throughout the country. Japan also supports economic security, mine risk awareness and house rehabilitation”. – Ms. Gillette said.