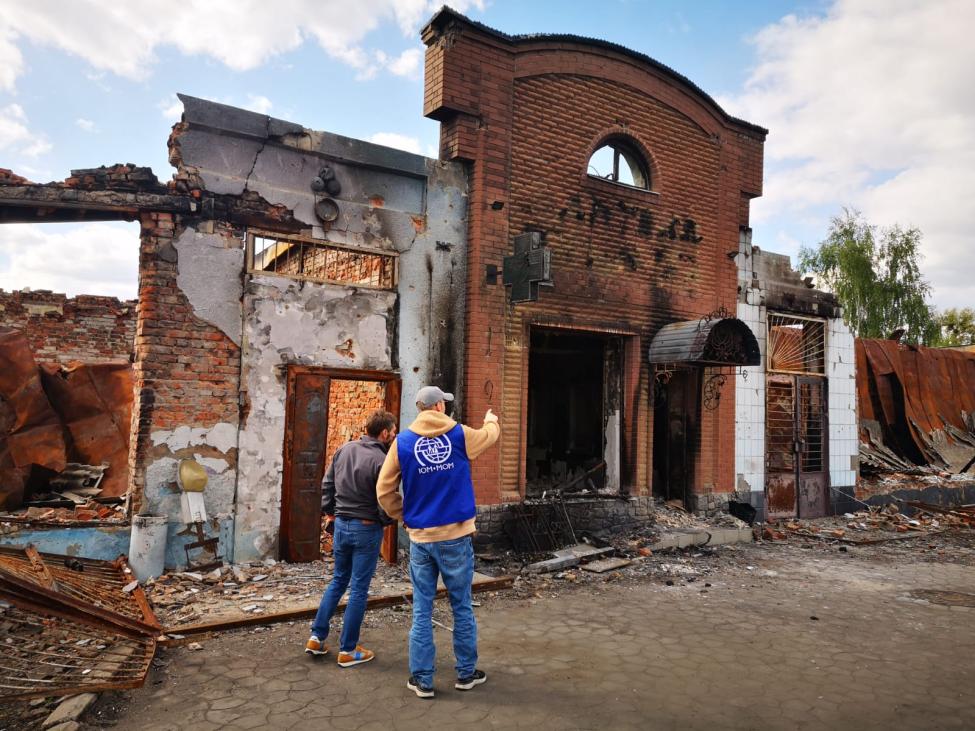 The war in Ukraine, which has caused an unprecedented scale of displacement inside and outside of the country, put many Ukrainian businesses on the edge of survival and severely affected the employment of the population. According to a new study conducted by the International Organization for Migration (IOM), Mission in Ukraine, the majority of small and micro- enterprises (SMEs) in Ukraine were, both directly and directly, affected by the war. Due to the generally lower resources and less resilience compared to big business, these companies were hit even harder.

To assess the impact, IOM analyzed key macroeconomic indicators, as well as main factors influencing business activities, such as logistics, finances, and labour market, in the worst-hit areas and in the regions with relatively safe security situation. Furthermore, IOM interviewed 27 representatives of central and local authorities, business support organizations and SMEs.

Key findings revealed that businesses suffered from the loss of labour power, destruction of logistical and transport infrastructure, and the deficit of financial resources. The continuous blockade of Ukrainian sea ports created an additional blow for Ukrainian export, in particular for the agriculture sector, which contributes to at least 10 per cent of Ukraine’s GDP.

“Our study identified key needs of micro- and small businesses, located in the frontline or neighbouring regions, as well as those that relocated to safer areas, mainly in western and central Ukraine. While the safety of workers, recovery of infrastructure and assets, and access to financial resources remain the primary concerns, relocated enterprises need additional support in transportation of equipment, search for new contractors and housing amid high influx of internally displaced persons,” said IOM’s consultant Dmytro Lyvch during the presentation of the study to key stakeholders, including the Ministry of Economy, the Ministry of Communities and Territories Development, regional military administrations, State Employment Service, businesses and non-governmental partners.

To support economic recovery during and in the aftermath of the war, the study offers a set of actionable recommendations for the Government of Ukraine and international organizations. The proposed measures include tailored financial assistance for SMEs in the frontline regions, establishing production clusters in safe areas, providing grants for transportation services and vouchers for advisory support to companies that relocated from their original locations.
IOM will use the study’s findings and recommendations to design and implement interventions supporting Ukrainian micro- and small businesses, as well as of the people who have lost their jobs/income sources because of the war.

“In the coming months, IOM will provide financial assistance and expertise support to enterprises that were successful prior to the war but suffered losses and have to adapt to new challenges and dynamics. This is part of IOM’s response to the crisis and is complementary to other IOM’s interventions focusing on housing solutions for IDPs and social cohesion in the host communities”, said Kateryna Ardanyan, Migration and Development Officer at IOM Ukraine.

The assessment was conducted in April-May 2022 within the project “SME Boost: Economic Integration of Internally Displaced People and Business Recovery”, funded by the German Federal Ministry for Economic Cooperation and Development (BMZ) through the KfW Development Bank. IOM implements this initiative since November 2021 in cooperation with the Ministry of Economy and the Ministry for Reintegration of Temporarily Occupied Territories of Ukraine to contribute to economic adaptation and recovery of micro- and small enterprises affected by multiple crises in Ukraine.