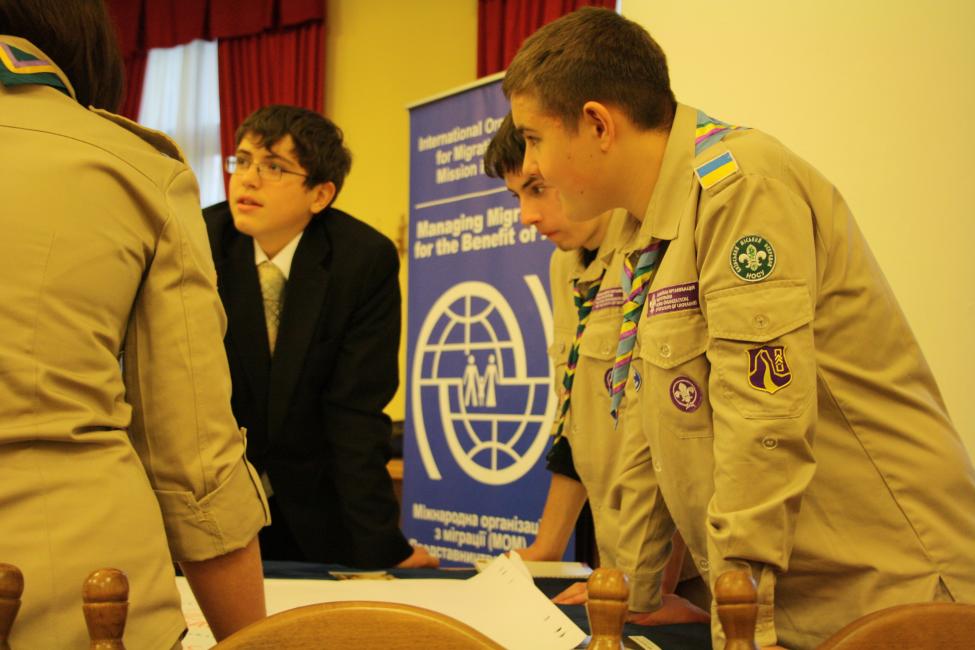 IOM Ukraine participated in Tolerance Day activities, organized for Kyiv adolescents by the Kyiv City Centre of Social Services for Family, Children and Youth. During the interactive event at the Kyiv City Hall, representatives from IOM, UNICEF, Danish Refugee Council, the International Women?s Rights Centre ?La Strada Ukraine? and others helped to develop projects related to countering violence and gender stereotypes among youth and promoting tolerance towards visible minorities, handicapped persons and people living with HIV. Over 150 teenagers from Kyiv schools? self-government participated in the event.

IOM Ukraine?s specialist on counteracting xenophobia Yana Salakhova together with Olena Bondarenko from the Social Action Centre NGO gave an overview presentation about the issues of xenophobia, racism and discrimination in Ukraine. Pupils were also able to learn more about the topic from materials presented by the Diversity Initiative partners such as the United Nations High Commissioner for Refugees, the Congress of National Minorities of Ukraine and the Integration and Development Centre for Information and Research.

After a brief introduction school children brainstormed on a public campaign to address marginalization of students of different ethnic origins at the school, conducted an improvised opinion poll, and created posters and slogans promoting tolerance, such as ?I like you in any colour?, ?It?s cool to be different? and ?Ukrainians, show your hospitality!?

The next day at IOM Ukraine?s office the concept of the Code of Tolerance for schools, developed during the event, was presented by its young authors to the members of the Diversity Initiative (DI) network. DI is a voluntary cooperation platform, which strives to uphold the human dignity and well-being of migrants, refugees and visible minorities in Ukraine. It currently includes over 65 organizations from the international, civil, corporate, and Government sectors as well as diplomatic missions and interested individuals.

IOM takes an active role in promoting cultural diversity in Ukraine in order to promote a more positive perception of migrants and migration. Working through the mediums of art, music, cinema, the Internet and interactive events, IOM invites the next generation of Ukrainian men and women to challenge stereotypes and experience the benefits of cultural diversity for themselves.