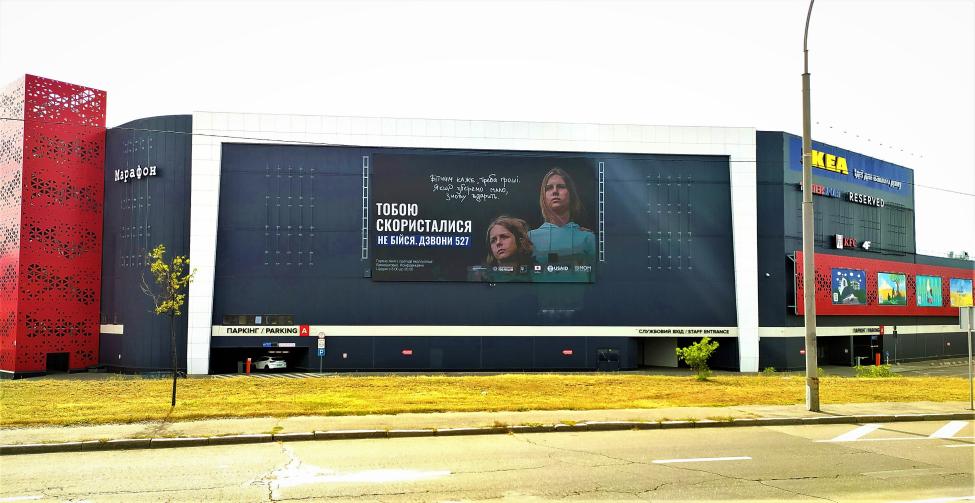 IOM's information campaign ''They Used You" was launched to raise awareness on different forms of exploitation, urging Ukrainians to stay vigilant. Photo: IOM

Over 32 million people, or 85 per cent of the entire population* of Ukraine, are estimated to be affected by the full-scale war that rages in the country for eight months.  Having faced the direct or indirect impact of hostilities, displacement, and the weakened economy, the population became more exposed to human trafficking and other forms of exploitation.

Every second Ukrainian (59%) risks getting exploited, being willing to accept at least one type of risky job offers abroad or in Ukraine, revealed a recent survey, commissioned by the International Organization for Migration (IOM). Almost a half of this risk group would accept a risky job offer abroad: to work without official employment and even in locked premises, being unable to leave a workplace freely; to irregularly cross the border; to give their passports, phones and personal belongings to an employer.

The survey also showed that due to the war over 20 million people lost income, over 16 million were left without jobs, more than 5 million had their homes destroyed, and over a million families faced food insecurity. Limited possibilities to meet basic needs, uncertainty, family separations, and loss of loved ones also caused a severe impact on people’s well-being as more than 15 million families reported experiencing mental health issues.

In these circumstances, both women and men are equally exposed to the risks of exploitation as 86% of Ukrainians believe that there is no or low chance that the risky situation might happen to them.

“During eight months of the war, people across the country have become even more vulnerable to human trafficking and exploitation as their confidence about the future is undermined. Many people are left without any means to provide for their families. Those who are ready to accept a job offer abroad would agree to work in exchange for free accommodation, food, or health services. IOM is working to increase awareness on every level and make Ukrainians stay alert and cautious,“ said Chissey Mueller,  Senior Protection Coordinator at IOM Ukraine.

IOM presented the results of the survey, funded by the United States Agency for International Development (USAID), on the eve of European Anti-Trafficking Day, which is annually observed on 18 October to raise awareness about human trafficking and other forms of exploitation.

To mark this day, IOM also continued its new information campaign titled “They Used You” appealing to the public through five short videos, each raising awareness about different forms of exploitation — forced child begging, sexual and labour exploitation, sex for survival, exploitation in the armed conflict — and providing information about available support.

Since the start of the full-scale war, IOM boosted its prevention activities by scaling up the work of the National Migrant Advice and Counter-Trafficking Hotline 527. From 24 February to 16 October, the hotline has provided over 115,000 consultations to almost 30,000 callers on safe migration, protection and other assistance for survivors of trafficking and other exploitation.

According to IOM Ukraine estimates, since 1991 over 300,000 Ukrainians have become victims of human trafficking. Since 2000, together with a network of partner NGOs, IOM provided reintegration assistance to over 19,400 persons. This included legal consultations and representation in criminal and civil court, medical care, psychological counselling, shelter, vocational training, a grant programme supporting those trafficking survivors who aspire to set up their own business and other forms of assistance.

The nationwide survey was conducted by Info Sapiens at the request of IOM in July–August 2022. Answers were collected from 5,007 respondents, aged above 16 years old, in every oblast of Ukraine and the city of Kyiv, excluding residents of the non-government-controlled areas (NGCA) of Donetsk and Luhansk oblasts, the Autonomous Republic of Crimea and the city of Sevastopol. Also, the survey has not fully covered the Ukrainians living abroad and residents of the territories temporarily occupied in 2022 with limited access to Ukrainian mobile operators.

* The government-led assessment of the general population of Ukraine conducted in 2019 did not cover Crimea and the non-government-controlled areas of Donetsk and Luhansk regions.