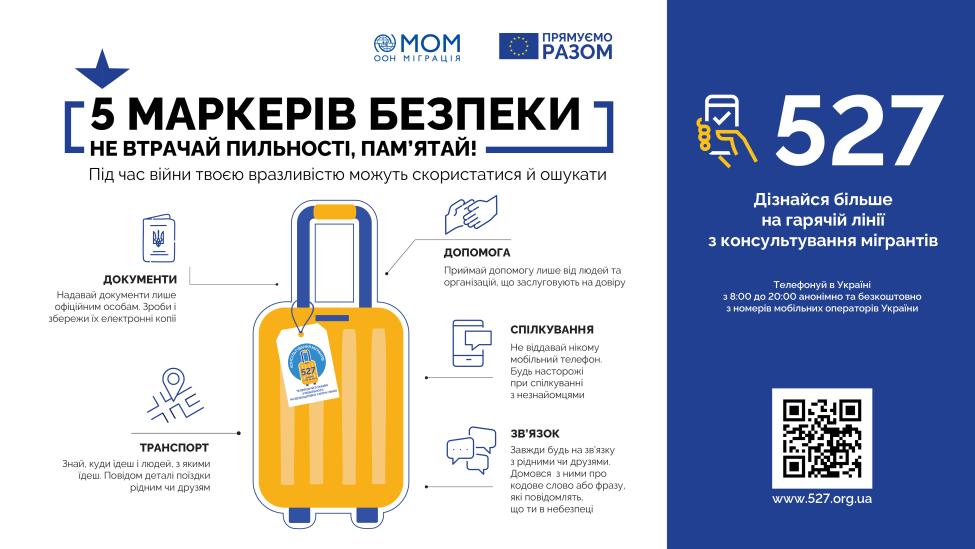 On May 2, the European Union together with the International Organization for Migration (IOM) launched an all-Ukrainian awareness-raising campaign for prevention of human trafficking during the war. The campaign, funded by the EU, will cover the basic security rules and risks of human trafficking that Ukrainians escaping the Russian invasion need to be aware of. During May, the campaign's informational materials in the form of videos, posters and infographics will be disseminated on national media, social networks, and through outdoor advertising.

“The EU is fully in solidarity with the Ukrainian people in the face of the unprovoked and unjustified Russian invasion and continues to provide strong political, financial and humanitarian assistance to Ukraine. During the war, Ukrainians face many risks and dangers every day, and within the framework of our communication campaign, we urge Ukrainians to remain vigilant and to remember that in such difficult circumstances there are always those who can help you, but there are also those who can take advantage of your vulnerability and confusion to deceive, exploit, cause moral and physical harm. Thanks to the information materials of the campaign, Ukrainian citizens will learn practical advice on the safety of themselves and their loved ones in order to make informed decisions in search of salvation from the war,” Rémi Duflot, Deputy Head of the EU Delegation to Ukraine, said.

Following Russia's full-scale invasion on February 24, Ukraine's humanitarian needs have risen to unprecedented levels. According to the latest report from the International Organization for Migration (IOM), in the first 17 days of April, almost 600,000 people became internally displaced persons (IDPs) in Ukraine, bringing the total number of IDPs to more than 7.7 million or 17% of the total population since the beginning of war.

“Assisting the citizens of Ukraine who had to leave their homes, supporting war-affected and vulnerable populations, we continue providing much-needed humanitarian aid to displaced people and host communities. At the same time, difficult life circumstances push people to take risky decisions and accept risky offers of help with shelter, transportation or employment, which can lead to labour, sexual and other forms of exploitation. That is why together with our partners from the EU we aim to scale-up our prevention work, so Ukrainians escaping from the war would stay safe,” Anh Nguyen, IOM Ukraine Chief of Mission, added.

The idea of ​​the campaign was also supported by the team of the "Breakfast with 1+1" programme and its hosts Yehor Hordeyev and Liudmyla Barbir. As part of a joint TV project, Ukrainians will see a series of stories about five security markers for documents, transport, assistance, interaction and communication.

“We must recognize that the threat of human trafficking during the war is a real danger for Ukrainians. Please do not be frivolous, make every effort and stay informed to protect yourself and save lives for yourself and those around you. I will do my best to help our people feel more confident and finally stop the scammers. And Liudmyla Barbir also joins,” Yehor Hordeyev noted.

“I am participating in this project and believe that the practical advice and stories will help many Ukrainians who were forced to leave their homes, taking care of themselves, and I urge everyone to contact the free 527 migrant counseling hotline in Ukraine. 527 – first of all,” Lyudmyla Barbir said.

All important information about the activities within the communication campaign will be collected on the platform of the TSN.ua website. Please follow also social networks under the hashtags #StandWithUkraine, #stoptrafficking and #527передусім.

The European Union supports Ukraine in the face of the unprovoked and unjustified full-scale Russian invasion. The European Commission has pledged EUR 1 billion for people fleeing the Russian invasion, inside Ukraine and abroad. So far, specific allocations amount to EUR 130 million for Ukraine and EUR 13 million for Moldova, implemented by humanitarian partner organizations. As part of the ‘Stand Up For Ukraine' campaign, the European Commission together with its partners has raised an overall sum of EUR 9.1 billion for people fleeing the Russian invasion, inside Ukraine and abroad. Support is furthermore available through repurposing of ongoing projects under other financial instruments than humanitarian assistance: a total of about EUR 140 million is already underway. This immediate response will be continued through the mobilization of EUR 330 million recently been adopted by the EU. The EU also continues supporting Ukraine with financial assistance: EUR 600 million in emergency Macro-Financial Assistance and a grant of EUR 120 million in budget support were recently disbursed. The European Investment Bank has committed EUR 668 million and rapidly disbursed most of this support to help Ukrainian authorities meet the most urgent financial needs. Other International Financial Institutions like the EBRD, IMF and the World Bank with whom the EU is partnering, are also working on immediate support to the population and SMEs. Via the EU Civil Protection Mechanism, the EU is channelling unprecedented amount of assistance to Ukraine including offers from all 27 EU Member States, and Norway and Turkey. So far, over 23,000 tonnes of assistance has been shipped to Ukraine. Finally, he EU has now coordinated the medical evacuation of nearly 200 people via the EU Civil Protection Mechanism to 11 European countries.

Aid from Canada Reaches Displaced and War-Affected People in Ukraine

Needs Growing for Over 8 Million Internally Displaced in Ukraine