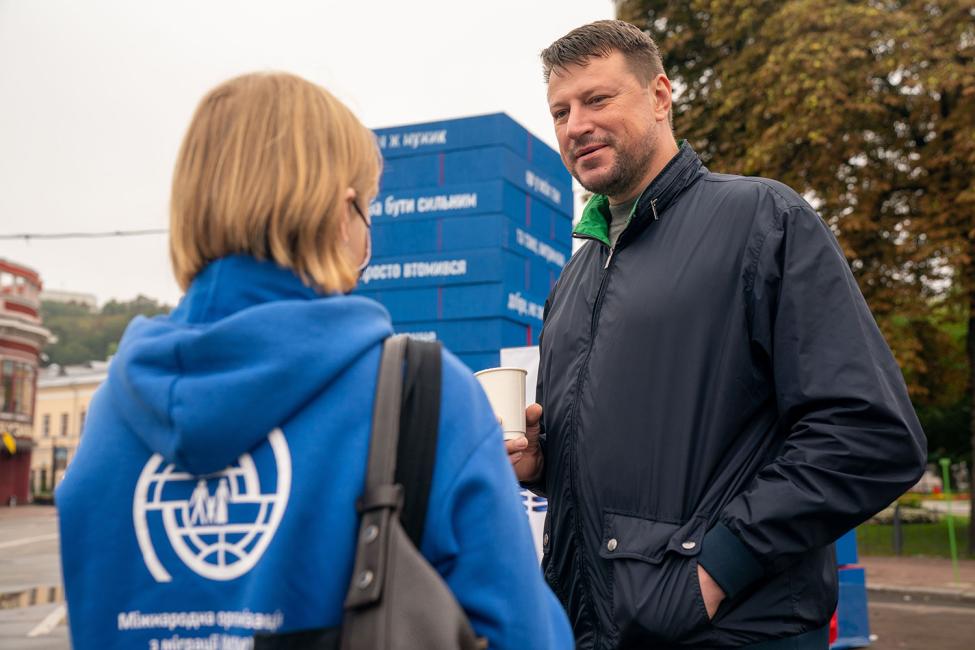 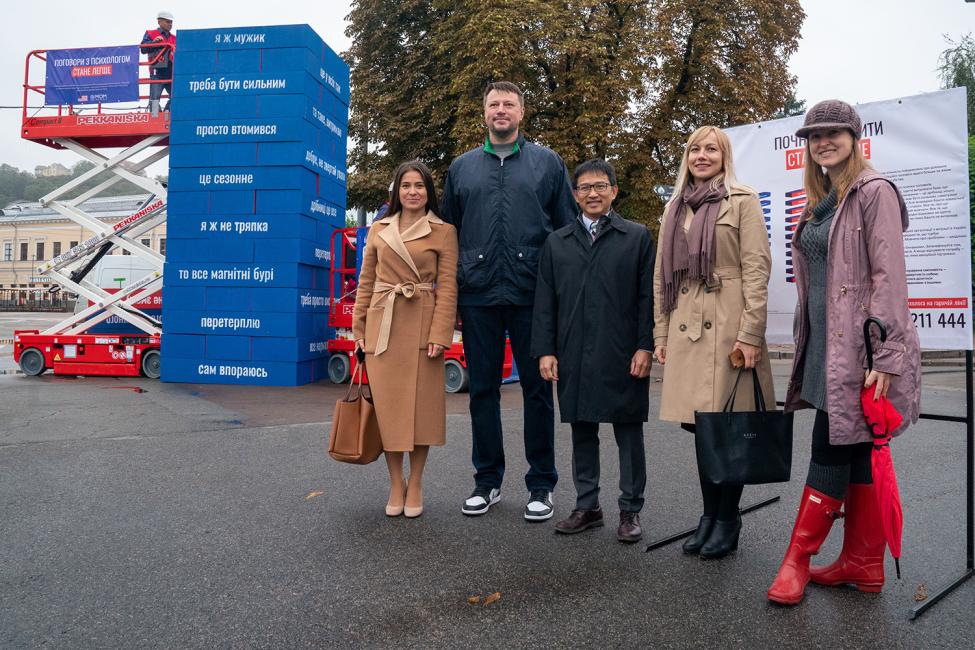 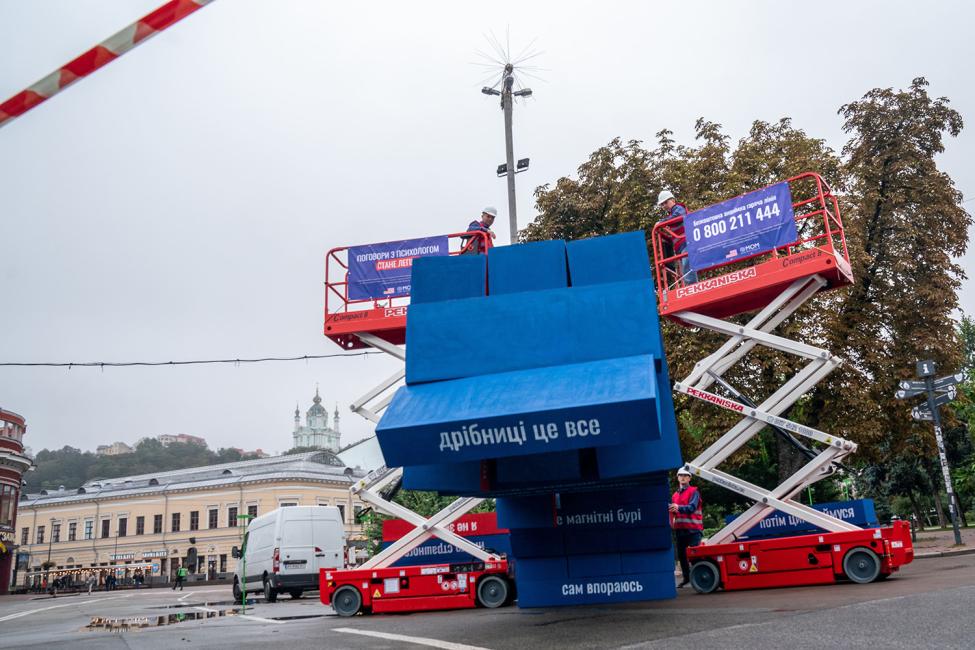 “I will manage”, “you have to be strong”, “I am just tired”, “leave me alone”, — a giant Jenga-like* tower with these and other word blocks stood on Kyiv’s busy Kontraktova square on 20 September 2021. As individual blocks were removed and the tower ultimately collapsed, it became visible that their hidden sides contained other messages showing what might really be going on: “I cannot sleep”, “this has no end”, “I am scared”, “I cannot stand this anymore”.

With this street installation, part of a public campaign also including advertising on the radio, in trains, through billboards and digitally, IOM reaches out to Ukrainian men and boys who are typically more reluctant to seek professional mental health and psychosocial support. The campaign is funded by the U.S. Department of State – Bureau of Population, Refugees, and Migration (PRM).

In the second year of the COVID-19 pandemic and the eighth year of conflict in the east of the country, the situation in Ukraine continues to pose enormous socioeconomic and mental health challenges, especially for the most vulnerable people in conflict-affected areas who can not afford professional mental health and psychosocial support. To address this gap, a toll-free Emotional Support Hotline 0 800 211 444, run by IOM with funding from PRM, has been operating since September 2020. The hotline is staffed by four operators, seven psychologists and one psychiatrist who provide tailored and confidential support to callers.

As of the end of August 2021, more than 3,400 consultations have been provided through the hotline. People are reaching out from across Ukraine, but the highest number of calls is coming in from the conflict-affected Donetsk and Luhansk regions.

So far, men represent only 30 per cent of the callers. With the launch of the campaign in September 2021 however, the share of men has grown to 60 per cent during this month. The main reasons for calling the hotline are problems with their partner, a state of anxiety and fear, problems with children, severe experiences of loss, and lack of motivation.

The IOM campaign was supported by an NBA star, former Los Angeles Lakers player Stanislav Medvedenko who attended the event in Kyiv to share his personal experience. “When I was a professional sportsman, all was great. I had so much adrenaline, the whole world was so bright. But after several injuries I had to finish my sports career. The world around me immediately became black-and-white, my life changed completely. And here is my advice to men who are going through difficult times: First, remember that you can rely on your family. Care more for your children and family, it will help you a lot. Second, do not be afraid to learn something new and explore the world. And third, do not be afraid of new challenges such as changing your occupation. I managed it and you will manage too.”

“The culture of seeking professional mental health and psychosocial support is only beginning to develop in Ukraine. Men are significantly more hesitant than women as they rarely express their feelings, trying to mask their stress instead,” said Anh Nguyen, Chief of Mission at IOM Ukraine. “We have launched this campaign to show that it is normal to seek professional help when you feel anxiety, fear, or depression. It is important to recognize the symptoms of psychological problems in time and not keep everything inside,” he added.

Opening the street installation, Deputy Minister of Social Policy of Ukraine Olha Revuk confirmed that many Ukrainians are going through stressful situations that may lead to further mental health issues. “We see the increase in domestic violence, and we know that people who are vulnerable at home can further fall prey to criminals, including situations of human trafficking. Therefore, mental health is of crucial significance on both the individual and societal level, it also affects the perspective of socioeconomic development,” she said.

Renee Lariviere, Regional Refugee Coordinator at the U.S. Embassy in Kyiv, highlighted that the U.S. humanitarian assistance is intended to relieve the suffering of those impacted by the conflict in Donbas, both visibly and invisibly. “I hope that this campaign will combat the stereotypes about mental health in Ukraine. It will show those who are struggling that they are not alone, and ensure they know there are resources available to offer them immediate and non-judgmental assistance,” she said. “Knowing when to ask for help is a sign of strength, and not a weakness.”

*Jenga is a game that requires players to take turns removing one block at a time from a tower of blocks. Each removed block is then placed on top of the tower, creating a progressively unstable construction.