From the Residents of Obama, Japan, to Ukraine: Kharkiv Receives Canned Fish as Food Insecurity Rises 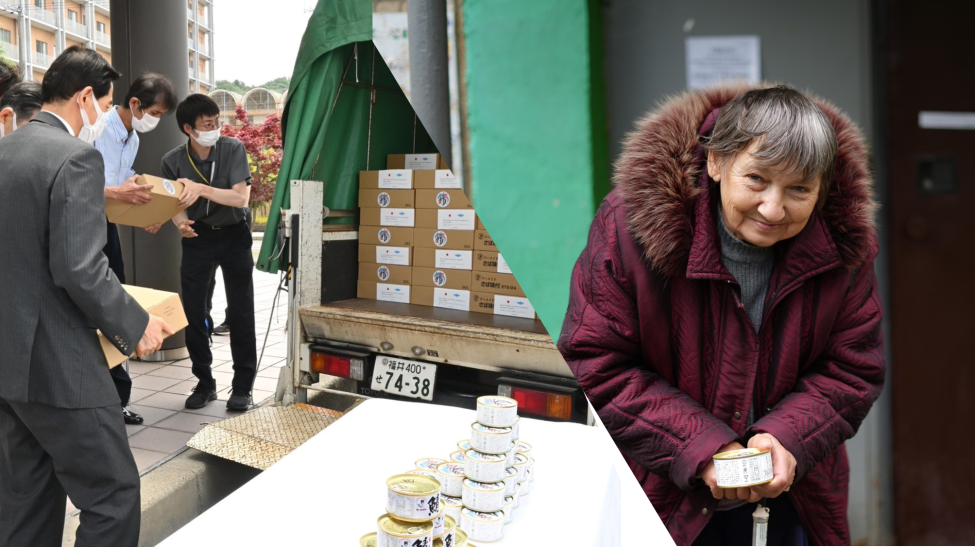 Kharkiv, Ukraine – Today, 23 September, the International Organization for Migration (IOM) completed the delivery of 2,400 cans of mackerel to people affected by the full-scale war in Kharkiv city.

The cargo was donated by the residents of Obama city, Fukui prefecture, Japan, which is famous for mackerel fishing, and was received by the local NGO “Kharkiv Eco City”, one of IOM’s partners in this locality, for further distribution.

Kharkiv has been one of the worst affected cities by the war since 24 February. Currently, IOM estimates that more than 382,000 people remain displaced in Kharkiv Region, facing acute needs of housing, health services, and cash, among others. The humanitarian crisis in this region deepens every day as near-constant shelling has not only left many dead and injured, but also triggers risks of food insecurity ahead of winter season.

The in-kind donation from Japan was stored in a warehouse in Rzeszow, Poland, and delivered by IOM to Kharkiv Region at the end of August. Over the last weeks, the most vulnerable displaced persons in the area received the fish to supplement their diet.

“The Government of Japan is very pleased to be able to provide timely assistance to the residents of Kharkiv, one of the regions most severely affected by the Russian invasion. We would like to thank Obama City in Fukui Prefecture for providing us with canned mackerel, as well as IOM and local NGO “Kharkiv Eco City” officials for their cooperation in the logistics of transporting the canned mackerel from Rzeszow, Poland to Kharkiv. The Government of Japan will continue to support Ukraine in the future. Moreover, as a government official and as an individual, I sincerely hope that peace will come to the people of Ukraine as soon as possible,” said Kuninori Matsuda, Ambassador Extraordinary and Plenipotentiary of Japan in Ukraine.

“Food items are the most needed aid in Kharkiv as many people cannot afford to buy them. Many residents lost their jobs, others were displaced and now live in temporary shelters. It is important to ensure that assistance is sustainable. We are grateful to the city of Obama, as well as those international organizations who support us,” said Kyrylo Chikiryakin, Head of the Humanitarian Office at the Kharkiv Youth Council.

IOM is also providing residents of Kharkiv city and the surrounding areas including those newly accessible with emergency shelter repair kits for damaged houses, winterization kits, kitchen sets, solar lamps, as well as hygiene items. Over the last seven months, almost 54,000 people were reached by IOM’s assistance in this region.

“With this kind donation from the city of Obama we hope to alleviate the situation of the people who are now unable to access proper food supply chains and livelihood opportunities due to the ongoing war in the country,” said Mohamed Elmasry, IOM Ukraine Operations Officer.

Since the start of the full-scale war in Ukraine, the Government and People of Japan have supported IOM’s response with establishing a network of medical mobile clinics and medical supply chains for affected hospitals, psychosocial activities, water, sanitation and hygiene (WASH) interventions, and other tangible support.